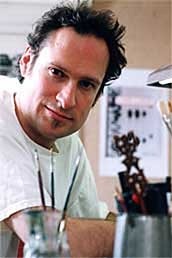 Kevin C. Pyle is an author/ illustrator of both graphic novels and non-fiction "docu-comics" on issues of social justice.

In the early 90s he co-founded and edited the willfully obscure and unwieldy comic compendium "Hodags and Hodaddies." Shortly therafter, Kevin began contributing and co-editing World War 3 illustrated, America's longest-running radical comics anthology. Much of the work done for WW3 illustrated was collected in his 2001 docu-comic, Lab U.S.A.:illuminated documents. A non-fiction comic investigation of clandestine racist and authoritarian science, Lab U.S.A. won the Silver Medal for Sequential Art from the Society of Illustrators. He has done performance and installations based on the text that have been exhibited in the Brooklyn Museum of Art, Mass MOCA, and numerous gallery settings. His first graphic novel Blindspot, was published in 2007 by Henry Holt for Young Readers. It was included in the Best American Comics 2008, edited by Lynda Barry. Katman, also with Henry Holt, was published in 2009 and named a YALSA (Young Adult Library Services Association) Great Graphic Novel for 2010. His third graphic novel Take What You Can Carry will be published in March, 2012. He is currently working on, with Scott Cunningham, a non-fiction docu-comic, Bad For You, about the history of kid-centric moral panics in America.